It's January, which is S.F. Sketchfest time in San Francisco. Now in it's 11th year, Sketchfest has bcome a Big Deal in the national sketch scene, taking place in multiple venues across the city with over a hundred shows. And with some very big names gracing the stage — this year bigger than ever —the festival has gained massive attention. That was one great reason to have Cole Stratton as our guest, as he is the co-founder and co-organizer of the event.

If you've never had a chance to check out S.F. Sketchfest and you're within driving distance of The City By The Bay, you should definitely try to get in to see at least one of the shows (if you can still get tickets - many of the bigger name shows sell out quick!) For the full lineup, hop over to http://SFSketchFest.com.

The other great reason to have Cole on is that he's also the co-founder and co-host of Pop My Culture, a very popular podcast that's about ten years younger than Sketchfest. It made a bunch of Top 10 Podcast lists last year and just fell in as one of fleet of p'casts under the Nerdist banner. Cole and his co-host, Vanessa Ragland, make for an engaging team and have had an impressive lineup of comic and celebrity guests on their show.

It's always a little more fun for me to have a fellow podcaster on a Succotash 'sode (the last time was Epi8 with Rob Celli from What Duvet Said), because they're invited to chime in on the various clips that we feature. Normally we don't play as many clips when we interview a guest but, this being one of our out-of-Studio-P interviews means that the guiding hand of engineer/producer Joe Paulino wasn't there to keep me more professional. so we have ten clips, a Burst O' Durst, a classic Henderson's Pants commercial...and the episode runs 17 minutes over our usual one hour time.

We also have a Skypversation with Kelly Carlin, spoken word performer and friend-of-the-show, who is performing her show A Carlin Home Companion at S.F. Sketchfest on Friday, January 27th. 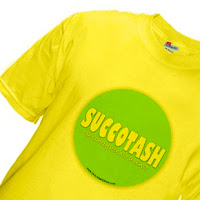 Succotash News: We have merchandise! What's a podcast, after all,without something to try to sell you? Now we have it! There's not much in the "Succotashery" so far — several styles of t-shirts, coffee mugs hats and some other stuff, all sporting the spiffy new Succotash logo. We'll bring more stuff online in the coming months but, for now, click on this link (or over on the ad on the side) and check out the swag!

Succotash Reminder: Yours truly is a contributing reviewer for This Week In Comedy Podcasting, Jesse Fox's delightful column at Splitsider.com. There's a fresh rack of the funniest and hottest comedy p'casts reviewed every week.

For a full lineup of who Cole and I talk about on this show, it's right here! (As always, just click on a show's title to be taken to their website. All the shows are available through iTunes. And some of them (including Succotash) can be found on your smartphone or tablet's Stitcher Smart Radio app.)

Pop My Culture
As is our custom whenever we have a fellow podcaster along, their show gets to ride shotgun. Cole Stratton and Vanessa Ragland's hot p'cast features guest comics, actors and celebrities chewing the fat about the latest trends, movies, music and media. The guest this clip is Jim Rash, familiar to fans of NBC TV's Community as Dean Pelton, and also co-writer of the hit movie The Descendants.

The Bugle
This fun news-based comedy show straddles the Atlantic with one host, John Oliver, based in New York and the other host, Andy Zaltzman, holding down the fort in England (where the show originates from.) Epi178 is a historic episode of sorts as it is the last one produced under the banner of the London TimesOnline. From here on out the lads are on their own (but if you already subscribe to The Bugle on iTunes, you should receive the new episodes without interruption.)

Never Not Funny
Fast n' furious Jimmy Pardo is the host of this long-running comedy podcasts - one of the firsts to get out there, actually. He's also got a pay-to-play model going for the "Pardcast", so you'll have to visit his site to get the whole magilla. You can sample every episode through a free 20 minute hunk that's up on iTunes, though.

Jordan, Jesse, Go!
Jesse Thorn and Jordan Morris host fast-paced conversational show. Our guest, Cole Stratton, has worked with them a lot over the years and says they're as fun in person as they sound on their podcast. In this clip they're joined by "the Bitter Buddha", comedian Eddie Pepitone.

The Long Shot Podcast
Pepitone again? Yep, only here he's on his home turf, where he is a regular along with Sean Conroy, Jamie Flam and Amber Kenny. This quartet often has a guest but, even when they done, they hold court and laugh it up about current events, disturbing dreams and pretty much anything their wide-ranging conversations turn up. 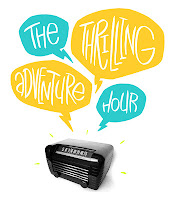 The Thrilling Adventure Hour
Our guest, Cole, has lots of good things to say about this imaginative show, which is a monthly comedy staple in Los Angeles as a live stage show. Done in the motif of an old-time scripted radio, the cast and their slate of impressive guests consistently deliver a great listen. And since it's meant to be a radio offering, it's translation from stage to podcast is dead on.

You Made It Weird
Comic Pete Holmes and his show is now part of the Nerdist network of podcastery. Patterned in the spirit of Marc Maron's WTF show, Holmes has a knack for making his guests (often fellow comedians) feel a little uncomfortable at some point in the show but seems to usually all end in laughter. Here he talks with the very funny Nick Kroll. (Side note brought up by our guest this week: Holmes is the voice of the E-Trade baby on the TV commercials!)

Pod F. Tompkast
We've featured this very creative show before and with good reason - host Paul F. Tompkins is one of the funniest, fastest and inventive comedians around. The scripted longform material performed on the Tompkast is difficult to do justice to in the time we have, so do yourself a favor and grab a full show soon.

This My Show
Podcaster Jeremy Wein is a tribute to the idea that if you want to do a podcast, just go ahead and do it. He's not a comedian himself but he's managed to crack the code to get a lot of funny people to sit still with him long enough to do a decent interview. Here's he's caught up with NBC-TV's Parks & Recreation's Aziz Ansari. (Apologies to Jeremy - in the episode, I give out his site as ThisMyShow.com...it's actually ThisMyShow.NET)

Big Pop Fun
Another Nerdist family podcast? Yeah, I'm not sure why they're so prevalent on Succotash this episode — I swear there's no payola involved (but a fellow can dream, can't he?) — but they do have a quality lineup over there. This one is a young p'cast, hosted by veteran comedian Tom Wilson, most famous for his role as Biff (and Buford) Tannen in the Back To The Future movies. He's also a good interviewer as you can hear in his 3-part chat with comedian/writer/director Steve Oedekerk.

We close out the show with our Burst O' Durst feature, faithfully supplied to us by the politically bent comedy stylings of Will Durst.

That's it for this batch. Write me sometime at marc@SuccotashShow.com and let me know what's on your mind. You can also call into the Succotash Hotline at (818) 921-7212 and sound off about something you've heard or something you want to hear.

Thanks for listening! (You are listening, aren't you?) Don't forget to pass the Succotash!