It took me FOREVER to get Episode 13 of Succotash, the Comedy Podcast Podcast, dropped this time. Plenty of material - with so many comedy podcasts online, THATS never a problem. The "hitch in the giddyup" as a old friend of mine says, was that our producer Joe Paulino, was traveling out of town. He suggested we just wait until he returned but - NO - I couldn't leave well enough alone, could I?

"Just leave me all the bit and pieces," said I. "I can put it together. All I need to do is learn how to use Garage Band." Anyone who uses GB for their 'cast knows how simple it is...after you've done it a couple of times. I got it down enough to push out Epi13, but it was like a baboon giving birth to a porcupine. Wearing a blindfold. In a hailstorm.

That said, I think I've managed to cram quite a lot into this 'sode. Pile of new clips. Couple of Henderson's Pants commercials. A joke from Larry Miller. And a brief visit with Kelly Carlin to talk about her upcoming one-person show, A Carlin Home Companion, which is hitting locally near Studio P on Sunday, November 13th, at the 142 Throckmorton Theatre in downtown Mill Valley. 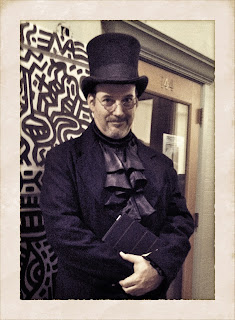 In addition to reminding you that Succotash is now available through your Stitcher Smart Radio app (on whatever kind of app-y device you own), I wanted to urge you to visit my scribblings as one of the contributing reviewers at Jesse Fox's This Week in Comedy Podcasts over on Splitsider.com.

I also participated in a roundtable discussions about podcasts ON a podcast (David Nelson's Comedy-A-Go-Go) which should be dropping soon. I had a great time and two of my fellow panelists are represented in this episode of Succotash when I play clips from their shows. (But you'll have to listen to find out who they are!)

Before I get to the meat, the picture I'm using here is actually of me this time, dressed in my resplendent Halloween costume which I wore at the Grin Reapers show. It was the first go at having a bunch of San Francisco comic types being onstage but reading from works of classic horror fiction.

Host Adam Harris has been interviewing the comics who pass through his hometown of Peoria, Illinois, for the past three years. In this clip, he bagged a pair of my old pals - Dan Chopin and John "Dr. Gonzo" Means - and we find out that a song parody joke deconstructed on HBO's Talking Funny last season originated from Dan.

Yeah, I had to look twice at the title of this podcast, too. (Even Google asked me if I was looking for the right thing!) The "Four assholes with microphones" (their words, no mine) are Drew, Pinder, Ryan Anti-Hero, and Prado God. (I love it when people are so ashamed of their podcast antics they can't bring themselves to use their real names.) These guys are doing their thing out of Staten island, New York, where their conversations cover a wide array of topics every episode.

This short, daily installment style of podcast is very appealing, although I prefer to download a week's worth at once and listen to all five in a row. Seth Morris has got a bead on his perennial sad sack character who, in this clip, shares his ever-changing "bucket list".

An export of Australia, the Dhead (which stands for dickhead) Factor is new to the podcast scene, with just six 'sodes under its belt. The main host is Jabs,, along with his mates Josh, Adrian, and Stu. At a half-dozen episodes, this laidback commentary-style show is still finding it's way. Fortunately, that Aussie accent is so charming it covers a multitude of sins.

• This Week with Larry Miller

To be honest, I'm not featuring a long clip of Larry's show, though I dearly love his program. Problem is that his stories are generally too long for me to feature on Succotash in their entirety. Fortunately, he recently told a old joke which I thought rated replay here. But catch Larry's whole show if you get the chance!

Comedian Jackie Kashian has found a great niche for her podcastery: Reveal the hidden dork inside pretty much everyone. Each guest she has on seems fixated on some field of esoteric interest, and can talk intelligently about it. In this clip, fellow comic Aisha Tyler unveils several pretty dorky areas of interest, including being very into the Lord of The Rings trilogy of books as well as anything Tolkien.

This podcast originates as an internet radio show out of Boston. (UnregularRadio.com, 8-10 PM) This was sent to me here at Succotashin hopes of being played. I don't mind playing some show's "sizzle reel" but I think you're better off with the "reel" stuff. Nonetheless, see what you tink of Big Sauce and crew.

Declared to be "TV's Biggest Fan" by TV Land back in 2000, Paul Goebel has since shortened it to King of TV. Revel in his presence. This is a very short clip he sent along - I guess kings don't have very good attention span skills.

We've actually got a double dose of political comedian Will Durst this show. Strap in for some good old fashioned contemplation on how the world is supposed to be working when there are questionable events afoot.

That's about it. Apologies for any strange sound qualities - I swear things are going to be better, soundwise, when Episode 14 rolls in because our producer, Joe Paulino, will be back in town.