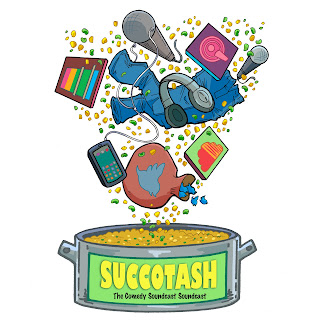 Saluton, estas mi Tyson Saner. Welcome to Succotash, the Comedy Soundcast Soundcast. Thank you for making us your destination listening for this next interval in your existence. With all the available choices you have to choose from as far as doundcasts go - or "podcasts" as many people still refer to them - you chose us, and it is an honor.

We've also got a rare triple Burst O' Durst from raging moderate Will Durst and selected reading from TrumPoetry.com.

So much to listen to, so little…uh…well, really there's as much time as there is, isn't there? So let's crack on!

My Best Break-Up
Sometimes, the best beginnings start with an ending. Reese Witherspoon and Hello Sunshine bring you My Best Break-Up, hosted by the charming Maeve Higgins and featuring a different break-up story each week. Our clips features Hannah Gadsby, from a recent episode where she explains her deep unease with success, coupled with the invisibility she often felt as a queer, autistic woman. She's made a conscious decision to view the world in a new way - without a filter of shame.

Broadway Baby
Join host Kimberly Schmidt and her husband Jay as they try to transform their friend Alex Fossella from casual theater goer to full-out fan boy. The clip we're featuring is from the show's pilot, where Kimberly and Jay explain Alex's first homework assignment: The cast album from Hair.

Mega
This soundcast is an improvised satire from the staff of a fictional mega church. Starring show creators Holly Laurent and Greg Hess as hosts Hallie and Gray, the clip we have is this past January and guest stars Edgar Blackmon (Alone Together, Popstar) as Edward Blackthorn who's talking sports, Game of Thrones, and falling in love.

Gilbert Gottfried's Amazing Colossal Podcast
Every episode of GGACP, host, comedian and actor Gilbert Gottfried, along with co-host and fellow pop culture fanatic Frank Santopadre, welcomes an astounding guest from the business of show. Our clip from a recent episode features guest Joel Grey, talking about being Joel Grey!

Cracked on and gone: one more episode of Succotash. Thank you so much for listening to us. I hope you have been entertained...and maybe you've got another soundcast or two to seek out and listen to more episodes of that you hadn't previously been aware of…so then I can say that at the very least you've been informed in some way... specifically that there's a whole world of soundcasts out there in a world (that still mostly calls them podcasts as of this point in history.)

What our show, this "Comedy Soundcast Soundcast" is doing, is saying: "Try this, you might like it in larger amounts" and then letting you decide. We also interview some of those people when they are willing and able. We here at Succotash are empathetic with those who create content and understand the time it takes to make it all happen. So, if you do enjoy our content, why not share it with others so that they also might have a few more choices presented to them in easily consumed and, presumably, digestible portions? (To keep the food metaphor going...)

So again, thank you for listening and if you wouldn't mind taking a little time out to rate and review us on iTunes we'd be forever grateful because in addition to telling others about us, the iTunes rating is another form of "word of mouth" that might even land us a real sponsor someday... one can dream.

Good night, and until next time won't you please, pass the Succotash?