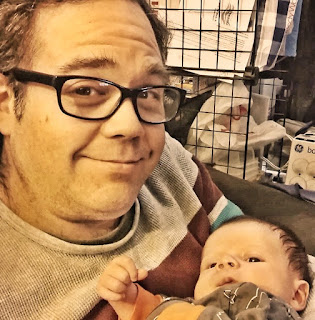 Saluton estas mi: Tyson Saner, your returning host and, as you might have heard (unless this is your first listen to our program in which case, welcome), I am a new father. I must thank executive producer Marc Hershon for resuming hosting duties for the most recent 3 episodes while I was adjusting to having a newborn. I'm still adjusting but I'm not complaining because I'm pretty sure that's what parenting is...constant adjustments.

It's been great so far. I have no jokes to make. It's totally worth it.

So what I've got for you this episode is a collection of clips I made before I went on leave in early January. All clips from this episode are from December 2018 or before so take a trip with me back in time, won't you…?

I've got clips from TigerBelly, The Ramble, The Smartest Man in the World, Comedy Bang Bang, The Mike O'Meara Show and Open Tabs.

I've also got a Double Dose of raging moderate Will Durst's "Burst O' Durst" segment... and keeping with the time travel theme BOTH Bursts are from February of 2019... first timers to Succotash, The Comedy Soundcast Soundcast, should note that there were NO Bursts from January 2019 and this episode will have released about halfway thru March... hopefully actually on the IDES... again we shall see... or will have by the time you hear this... wheee!

And to prove I didn't record this very long before release I've selected two very recent entries from our sponsor http://TrumPoetry.com from early March for those of you playing along at home, or wherever your head happens to be when my voice hits your ears...

TigerBelly
A no-holds-barred arena for half truths, social no-nos, and animal behavior-featuring comedian Bobby Lee and his best friend Khalyla. Every Wednesday. Clip is from Episode 172: Christina Pazsitzky & The HOV Gooch. In this clip, the group discusses the cycle of popularity that comedians of various race and gender enjoy and/or miss out on depending on the part of the cycle they are experiencing.

The Smartest Man in the World
Comedian Greg Proops is smarter than you. I understand that former host and current executive producer of Succotash Marc Hershon clipped "SMITW as recently as Epi186: "Subbin' For Tyson", which is a great episode BTW as are all of Mr. Hershon's episodes... they are my template after all... the thing is, I don't really share what my clip choices are going to be with Mr. Hershon so... I already had a clip ready to go... I feel like maybe more information should be shared from my side of the table sometimes... we'll see.  in the meantime, I wanted to feature  this clip from Pennies, released Dec 20, 2018, because this clip is of Greg's farewell to Penny Marshall who passed away on December 17th, 2018, and features his wife: Artist, photographer, activist, and podcast host Jennifer Canaga.

Bertcast's Podcast
Comic and man-of-the-world Bert Kreischer shares his wisdom and life with you. From Epi5 "Open Tabs", in our clip Bert speaks of Michael Rapaport, the actor and filmmaker who directed the 2011 documetary "Beats, Rhymes & Life: The Travels of A Tribe Called Quest". Bert also speaks about his experience of the musical group "A Tribe Called Quest...".

The Mike O'Meara Show
The Mike O'Meara Show is a fun mash-up of real life, pop-culture, news of the day, dynamic audio clips, and three guys — busting each others' balls. This clip is from thieer Epi2138, "X-Ray Vision", wherein Mike talks about being the parent of a five-year-old and a bit of Star Wars...beware of major spoilers for "Star Wars Episode IV: A New Hope" from 1977...

The Ramble
Comedian Jerry Rocha talks about whatever is on his mind at the time. Clip is from Epi160, with guest Eddie Pence, the Vice Host of The Ralph Report with Ralph Garman. In this clip there is a discussion of death in films, including a Top ten list.

Well, there's another episode sorted and served up. I hope it was to your liking. Remember, it's a tasting plate of just a small portion of the type of comedy content or alleged comedy content you could find if you happened to be looking for an alternative to terrestrial radio. Or perhaps you are thinking of starting a soundcast so you were wondering what they might sound like.

I've only scratched the surface of what is available in ONE genre. There are also sketch and narrative-based comedy soundcasts and, if you'd like a few more examples of what else is out there, might I direct you to the show archive at www.succotashshow.com ... there's 188 more episodes worth of clips, Bursts O' Dursts, and episodes featuring our first "sponsor" Henderson's Pants to be enjoyed as long as the EMP from a nearly inevitable nuclear conflict doesn't wipe out all electronic traces of our program.

If you want entertainment in your bunker I'd recommend collecting these episodes as soon as you can... make your own time-capsule if you like. Or you could even start telling other people about this program so that they can listen to us and potentially enjoy us and add us to their apocalypse playlist among other forms of digital entertainment. If you did that we'd be friends for life because that's what we mean when we gently implore you to (please) Pass The Succotash...