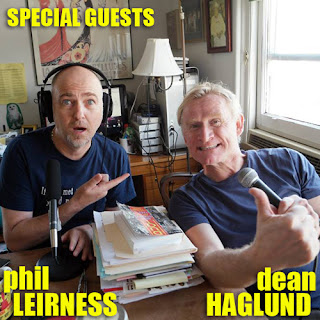 Your friends in podcasting, Phil Leirness and Dean Haglund of Chillpak Hollywood Hour agreed to sit down with me earlier this week to discuss their brilliant independent film, the dark comedy The Lady Killers. If you are an adult and have not seen this film yet, I believe that you should. It explores the theme of Toxic Masculinity and its symptoms of "Sexual-Conquest-as-Friendly(?)-Competition" as well as the plausible consequences involved when it all "stops being fun" and starts being deadly.

Just for clarification, this film is NOT a remake of the 1955 film The Ladykillers. THAT film WAS remade in 2004 and directed by Ethan and Joel Cohn. This more recent film was released in 2017 and its title is comprised of 3 words. If you Google it as three words, those words being "The", "Lady", and "Killers" Google will ask you if you meant to search for those other films.

The solution? Bypass Google completely and click directly to the movie's URL — http://theladykillersmovie.com/

In addition to OUR interview with the hosts of YOUR Chillpak Hollywood Hour, I've got a single Burst O' Durst from Raging Moderate Will Durst, and selected reading from TrumPoetry.com!

And there you have it.

The first Succotash, The Comedy Soundcast Soundcast of the year in the can…or indeed out of the can and into your ear-mouths and ear-bellies… okay, THAT'S just horrifying, sorry about that…

I'd like to thank our guests Phil Leirness and Dean Haglund of Chillpak Hollywood Hour again for agreeing to spend time chatting with me about their film and, as you heard, other topics…

Chillpak Hollywood Hour can be heard on Blog Talk Radio, Stitcher and iTunes, and you can find the archive of "Chillpak Hollywood Hour" at chillpakhollywood.com. The show can be reached on Twitter at @DeanAndPhil, Phil at @philleirness and Dean at @dhaglund and remember you can find the website of their 2017 film "The Lady Killers" (three words) at theladykillersmovie.com where you can purchase the film on disc as well as be updated on theatrical screenings of The Lady Killers when those  are announced.

If you want to see it at home or on your device there are MANY options including iTunes, Google Play, VUDU, Microsoft Store, Amazon Prime Video, Flix Fling, Direct TV, Fandango NOW, Verizon's Watch Fios service, YouTube, MCTV and Steam.

I'd also like to thank you, the listener for spending time with us this episode and every episode you choose to listen to. You are nothing if not spoiled for choice of what to listen to…and I am nothing without you. Ok, that's a bit much. I shouldn't say I'm nothing even when attempting to compliment you. It's unhealthy behaviour and I made a New Year's Resolution to be healthier both physically and mentally… so we'll see how that goes.

I hope your 2019 shapes up to be a delightful one and I also hope that the film The Lady Killers becomes part of the larger conversation about how humans treat each other… so we'll see how that goes as well. Thank you again for listening and if I could ask something only slightly more of you it would be to tell other people about this program as well as the programs featured within for that is what we mean when we ask you to (Please) Pass The Succotash.