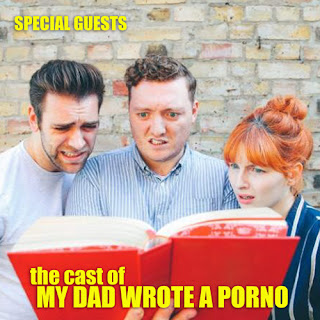 I don’t think I’ve had an interview on this show that I haven’t enjoyed doing, but I must say that chatting with these guys was a lot of fun. Jamie, whose dad is the one who actually DID write the pornographic novel in question, Belinda Blinked, along with sharpshooters James and Alice were kind enough to set aside part of a Sunday evening in England recently to accommodate me and the time change between London and San Francisco.

The show is now well into the second season and, appropriately enough, focuses on Rocky’s sequel to Belinda Blinked. As you’ll hear in our interview, Jamie was running a little late but James, Alice and I decided to start without him.

As if that interview wasn't enough, we've got a double dose of our Burst O' Durst segment featuring our resident political comedian and social commentator Will Durst, plus TWO bonus interviews — a couple of short chats I had at the recent Los Angeles Podcast Festival. The first features Kurt Long and Joey Bragg from The Dudes of Future/Past soundcast, while the second is with George Grimwood, purveyor of the Podnose network from England.

Also, this episode is brought to you by Henderson's HalloPants, just in time for Halloween.

Our grassroots movement to change the term “podcast” to “soundcast” is being embraced by some, dissed by others. Abner Serd of the Tall Tales & Shaggy Dogs show has changed all of the references on his website to “soundcast”, and the ThunderTaco show is also officially a soundcast. I see there’s also the Salvation Army Soundcast.

On the other hand, I heard via Twitter from the Wheelbarrow Full Of Dicks show and also Chris Lanuti from the Broadcast Basement show that they don’t support the change. Chris says he thinks the name sounds “silly”, which I just don’t get, really. Podcast sounds less silly than soundcast?

That’s okay, of course. I think it’s fair to say that I’m a little disappointed that a couple of shows we’ve often mentioned and supported can’t throw in with us on the “soundcast crusade”, but that’s their prerogative. We still love you guys. Not to mention we still can refer to your shows as a soundcast here on Succotash.

Please take a few moments to rate and review Succotash on iTunes, if you’d be so very kind. You can also help us out to defray the cost of producing and hosting this mess by clicking on the Donate button at our homesite, http://SuccotashShow.com, or by doing your online shopping by clicking on the Amazon banner at the top of that very same homepage, or purch some merch at our Succotashery, not surprisingly reachable through that same homesite.

Until our paths cross again, thanks for passing the Succotash!