Yes, it’s me. Marc Hershon. Your host and fully articulated artificial resuscitation dummy for Epi137 of Succotash, the Comedy Podcast Podcast. Or The Comedy Soundcast Soundcast, as the case may be. 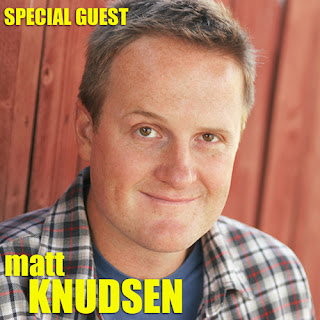 This time around we bring you an edition of Succotash Chats, featuring my interview with Matt Knudsen — comedian, actor, bon vivant, and host of the Grabbing Lunch podcast.  Matt was kind enough to have me and Cole Stratton, co-host of the Pop My Culture podcast, as guests on his show when I was in LA last year. As he was recently playing a Tuesday night here in Northern California, I thought I’d return the favor. A few weeks ago, we grabbed dinner and a chat at the Piazza D’Angelo in Mill Valley before his show.

We talk about his early days as a merchant marine before he caught the comedy bug, and some of the acting and other stuff he's been up to since. (We don't talk specifically about any of these, but Matt's appeared recent in such TV shows as The Mindy Project, Rosewood, The League, and Why? With Hannibal Buress.)

We’ve got a Burst O’ Durst segment in this episode. I always appreciate political comedian and social commentator Will Durst's segments on the show but especially with this year’s Presidential race being so wonky — and publicly embarrassing for Americans with what we’ve got running on both tickets.

We also have a call via the SpareMin app with Reverend John Price, a faithful listener who is on the verge of dropping his own soundcast soon. 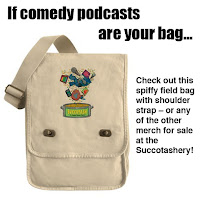 And this whole mess is brought to you by Henderson's Back To S'cool Pants. Where would this show be without Henderson's Pants? Well, the same place we are, actually, which means we still can use you vigorous use of our Donate button up at our homesite, http://SuccotashShow.com. While you're there, don't be afraid to use the Amazon banner at the top of the page to do you shopping at the world's largest everything store — because we get a little taste of whatever you spend there. And we've got a link on our site to our Succotashery, whould you want to grab a t-shirt, mug or other piece of merch festooned with the Succotash logo!

I mentioned last episode, Succotash Clips Epi136, that I’m going to start a movement to replace the name “podcast” with “soundcast”, because why should Apple retain hold of the medium in the name with the vestige of a technology they've basically discontinued?)

So I’ve contacted our musical director, Scott Carvey, and asked if he’d be able to retool his portion of our theme song to say “soundcast” instead of “podcast”. And our booth announcer, Bill Heywatt, is getting ready to record new intros and outros for the show that reflect that change as well.

It’s likely going to take some time to make the switchover and then will come the long, hard road to getting an entire world to change how they think and talk about the medium but what the heck? I’ve got nothing better to do with my time. And, in fact, our friend Dave-In-The-Cave, former co-host of former podcast Taco Tuesday, is about to start his new show, the Thunder Taco Soundcast.

More on the soundcast situation as it unfolds.