Howdy, neighbors! It’s me – Marc Hershon – your host and rheostat for Epi129 of Succotash, the Comedy Podcast Podcast.

I hope you enjoyed the most recent installment, Epi128, our live recording from the Comedy Lab at the Improv in West Hollywood. Dana Carvey, his sons Dex and Tom, and comedian Wayne Federman were our guests. I’m not real handy with figuring out the metrics on the show but I THINK it’s our most downloaded show so far since we started Succotash almost 5 years ago. 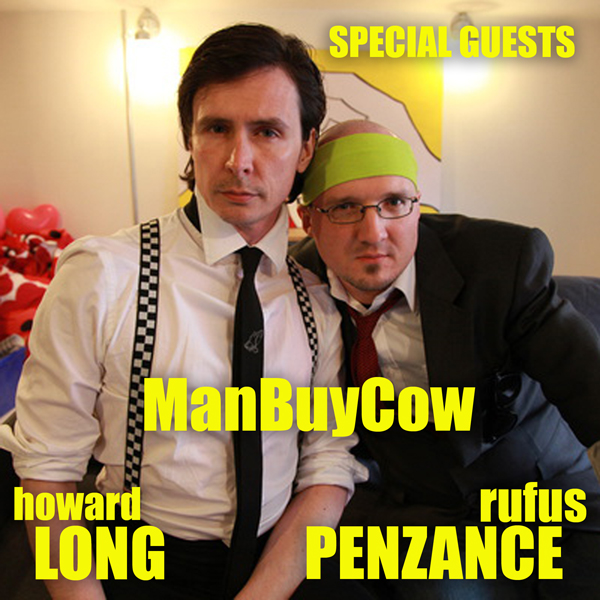 This episode is another Succotash Chats version, and my special guests are Rufus Penzance and Howard Long — the writers, producers, and actors of The ManBuyCow Podcast from England.

I’m a big fan of of this show and these guys and it was a treat chatting with them.  If you’re thinking of getting into podcasting, comedy or otherwise, I think you’ll be inspired by their story as they’ve had to teach themselves every aspect of what they do on the show – writing and performing not just comedy but music, figuring out all the equipment and figuring out how to get it distributed.

ALSO IN THIS EPISODE

We have a double dose of our Burst O’ Durst segment with political comedian and social commentator Will Durst, a classic Henderson's Pants commercial and the Tweetsack is back! Which means we'll be getting to your cards and letters…or, rather, your tweets and emails.

Boom. That’s what we've got for you this week. But it's an hour's worth of show, so kick back, push those earbuds in and hit Play.

Remember to check out the all-new Season 3 kickoff episode of the ManBuyCow podcast. And if you’d like to help us to keep the equipment on here at Studio P and Studio F, it wouldn’t hurt you click our cheerful blue Donate button on our homesite, at http://SuccotashShow.com. Which is also where, incidentally, you can click on the Amazon banner at the top of the page and help us out by purchasing something at the world’s largest everything store. And we have a fully stocked Succotashery, with t-shirts, hats, coffee mugs and more, all festooned with our several Succotash logos.

Thanks for listening and don’t forget — wherever you go, whatever you do — thanks for passing the Succotash!

over six years ago

What s a soundcast? Some still refer to them as podcasts , but that is SO last Tuesday. Get with the program, Lumpy.