Ho, ho, ho! Yes, it’s me, Marc Hershon. Your host and Santa Claus for Epi123 of Succotash, the Comedy Podcast Podcast. My gift for you this year? It’s another installment of Succotash Chats, where I feature a conversation with someone associated with podcasting in one way of another. And this Christmas edition is not different, as our Special Guest is none other than Wayne Federman! 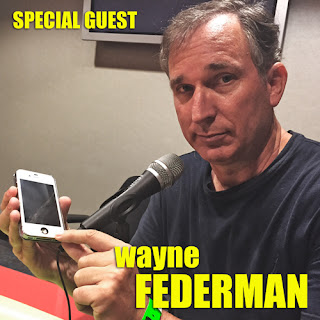 I thought he’d be the perfect holiday treat since, just like Jesus, he’s Jewish, funny, and occasionally misunderstood. Wow. That comparison would draw SO much hate mail from fans of both Jesus and Wayne…IF anyone actually listened to this show.

Wayne’s a great guy, a funny comedian, and a delightful actor, not to mention the co-host of a podcast called Human Conversation, with Erin McGathy. Regular Succotash listeners may remember I spoke with Wayne during multi-part Epi116 back in September when I was at the LA Podfest. We’ve got more time to delve into things this time around and we get into his long time served on the comedy stage, his podcast experience, and some other topics besides.

In addition to my chat with Mr. Federman, we have a double dose of our Burst O’ Durst with political comedian and social commentator Will Durst, a brand new Henderson’s Pants commercial penned by our friend Harry White and featuring our own Bill Heywatt, back in fine form after a brief illness.

In fact, as a special Christmas treat for you and your hole…family, we have Bill singing a special holiday song!

Speaking of songs, we also have a new and bizarre a cappella tune from Abner Serd, which will immediately follow the Tweetsack this time around, and before Mr. Durst’s second segment. 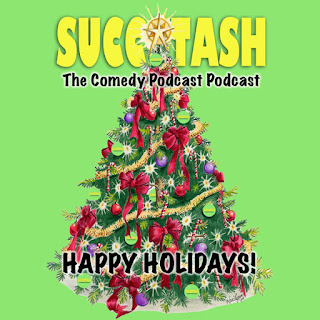 Before we get into the stuff, I just wanted to wish you and yours a happy holiday season, whichever holiday you celebrate. And that includes no holiday at all, depending where in the world you might be or whatever your philosophy might entail.

Sometimes I feel like Succotash is out on the Island of Misfit Podcasts, since we’re mostly playing clips and promoting other comedy podcasts and we only generate a tiny amount of our own material, plus some interesting interviews with cool people connected to podcasting.

We’re not fancy by any means, and we’re not the kind of show a podcast network is keen to pick up — what network wants to be promoting podcasts that aren’t on that network? And we don’t have much sponsor appeal it seems, either.

But YOU’RE listening to Succotash and that means the world to me. When I started the show almost 5 years ago — FIVE years! — I didn’t know if anyone would want to listen but you and a lot of other people have proven that there’s an audience for what we do at Succotash, and I want you to know that its’ really appreciated.

I want to thank the crew here, too, especially our producer/engineer Joe Paulino, our announcer Bill Heywatt, and especially our Associate Producer Tyson Saner, without whose help this show might have stalled out. Harvesting clips is no easy task. It reminds me of my days as a segment producer for a clip show on TV — largely thankless but imminently the hull that keeps the whole damn ship afloat.

I also want to thank all the comedy podcasters that we’ve clipped this past year for their generosity in letting us pick and choose what we want to feature from their shows.

And, of course, I want to thank the guests that have been kind enough to let us visit with them on the Succotash Chats editions of the show. I’ve enjoyed every interview we’ve presented for you. Sometimes the audio quality hasn’t been the best but I’d rather take the opportunity to interview someone when the moment presents itself rather than to be overly precious with making sure we can get the best location to record it in. Just because I’ve lost a couple of chances to chat it up by doing that and it doesn’t seem worth missing those opportunities.

That’s going to put a bow around the Christmas gift that has been this episode of Succotash Chats, the Comedy Podcast Podcast. Thanks again to Wayne Federman and thanks again to YOU! May you and yours have an absolutely stupendous time this holiday season and if you forgot someone on your gift list this year, you can always make it up to them by passing them the Succotash!