Yes, it's still Marc Hershon and I'm still at the 4th Annual Los Angeles Podcast Festival. Taking up space in the SquareSpace Podcast Lab and interviewing comedians, podcasters, and comedian-podcasters as they breeze through the doorway. 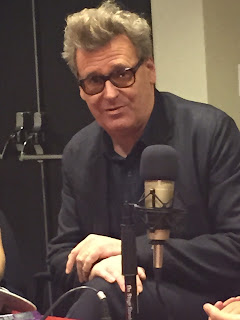 I'm releasing each interview as its own "minisode", and this is the sixth in the lineup, which is why it is Episode 116F. And my guest this time around was our guest on a full episode of Succotash back in Epi109 in May: Greg Proops. At this festival, he's guesting on Jackie Kashian's The Dork Forest, performing his own show, and guesting on Dinner Party Download.

Known for his tenure on the various incarnations of Whose Line Is It Anyway on TV, Greg is the host of The Smartest Man In The World and the Greg Proops Film Club. He's also recently released his first book, The Smartest Book In The World. And now he's on a jagged world journey — hopping, skipping, and jumping to different countries around the world to promote the book, mostly by doing his podcast in the same locales as well.

Greg and I revisit some of the topics we hit on back in May when he was on the show: The challenges of doing improv as a guest performer, keeping an act fresh, staying sane on the road, and more.

I'm posting this on Sunday, the last day of the @LAPodfest. I'm not sure who else might sweep through the portals of the Lab, but I'll grab who I can and bring those Succotash Chats to you.